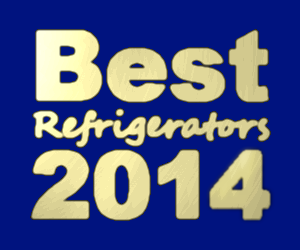 Review the Best Refrigerators for 2014

Compiled by Joseph Seeley on January 1, 2014
5
The best refrigerators for 2014 are here in our top 5 list! There’s a little bit of everything on this year’s list; Lots of Stainless, Side by Sides, French Doors, hot water heaters, WiFi … which features combine to make the best overall fridge for 2014?

The big buzz in 2013 was all about smart refrigerators like the LFX31995ST from LG that claim to streamline your food management with apps for only $3499.99. This could be considered overkill just because there are so many other places and devices where you can check your Google calendar or look at the weather. 2014 heralded in an age of appliances with lots of bells and whistles that actually had to do with food prep and refrigeration.

If you really feel the need to get a Wi-Fi fridge then try out Samsung models first. This has an MSRP of $2499 which basically saves you $1000 over models from LG. The LFX31995ST from LG had lots of complaints about the apps being clunky or useless but buyers liked the fridge overall. It seemed that many people would get the refrigerator home and realize they didn’t need the extra features but the appliance itself is pretty solid.

With this Samsung model though the reviewers were using the apps a lot more. It also comes with a Pandora app and speakers. Sure, this is overkill but it is still more reasonably priced compared to other appliances with apps that aren’t as well known or used as often.

On the outside this looks like a typical stainless steel French Door refrigerator and you may be wondering why the MSRP is pretty high at $3,699. The overall features and usability is what earns this refrigerator a spot on the list.

It claims to hold about 31 grocery bags in it’s 31 cubic feet. It uses the Twin Cooling Plus®, Counter-Height FlexZone™ Drawer, and LED lights that many Samsung models come with.

The main feature that sets this refrigerator apart is that it has a sparkling water dispenser from SodaStream. You can also use still water. This does add to the overall maintenance cost as you will have to buy carbonators separately. Plus, the IceMaster system will help those drinks stay cool.

The SodaStream shouldn’t be the main reason you buy this refrigerator as you can get a countertop version for around $100. However, it is one of the few add-on’s to appliances this year that is actually useful and it does save you some countertop space.

You may be feeling frustrated with all of the new technology available and you just want a simple refrigerator. The GE Artistry™ Series came out in the later part of 2013.

The concept comes from Tomas DeLuna who is 27 years old and wanted an appliance that would be accessible pricewise for younger home owners. He basically just wanted you to have to decide between having an optional icemaker and whether you wanted black or white. Since it has a retro style usually these refrigerators also come in brighter color options. This would be more difficult to match with your existing appliances but it would be nice to see colorful appliances at a lower price point.

There won’t be as high of a learning curve with this appliance as opposed to most of the other new releases. Instead of just adding on more things for the sake of something new, it was simplified.

The exterior design is also one of the most affordable retro style refrigerators on the market at $1199. It could also work with a contemporary kitchen too. If you already have white or black high gloss appliances this could coordinate but add more style to the room. Plus, it has a vintage style to it but the convenience of a bottom freezer.

The GE Cafe™ has a few models where you can get hot water right from the door. There are four different settings that you can use for soup, tea, cocoa, or just warm water. There are currently only two refrigerators from GE with this feature. The first is the counter depth CYE23TSDSS. The second is the CFE29TSDSS. They both have an MSRP of $3099.

For a new feature that you would probably use everyday or even several times a day if you drink tea this fridge stands out. Some of the apps on smart fridges may look cool in the store but think about how often you would actually use it.

You can find the LED lighting, triple cooling system and larger 32 cu. ft. capacity from lots of brands and most of them won’t carry the $3,999 price tag. This refrigerator is special because of the convertible zone. Finally, an innovation for a refrigerator that actually has to do with keeping things cool!

This is a four door refrigerator. The top half is refrigerator space. The lower left quadrant is a freezer. The lower right quadrant can be either. This is useful for those shopping trips when you bring home too much fresh food although you would have to rearrange the food that’s already in there. Reviewers appreciated the four door design for organization instead of a larger drawer that is commonly found on bottom freezer units. It has plenty of five star ratings although there were a few complaints about nose. Ironically the Convertible Zone wasn’t really mentioned in the reviews even though it’s the main reason to choose this over other Samsung models.

There were a lot of new technology additions in 2014 but there were fewer brands who kept them both affordable and practical. GE and Samsung earn top honors for coming up with new ideas for refrigerators that are actually needed.