Compiled by Joseph Seeley on May 13, 2013
5
What are the best refrigerators you can buy in 2013? We take a look at 5 of the most deserving refrigerators and pick a winner based on price, features, looks, and energy efficiency!

The best refrigerators on the market today are a weird mix of old and new. There’s a refrigerator that isn’t quite out yet, but obviously deserves to be on this list. There’s a fridge that looks like it was released 60 years ago. Then there’s others that have been around a couple years. Perhaps the strangest development in 2013 is that the best new innovation in refrigeration isn’t about how a fridge cools, but how it heats!

Here I’ve put together my top 5 best refrigerators for 2013. 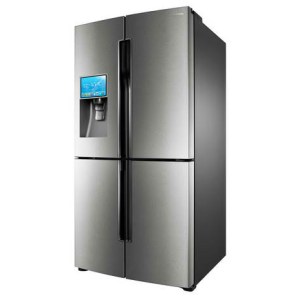 The Samsung T9000 hasn’t hit the market yet, but it is slated to soon. This refrigerator really created quite a stir at CES in Las Vegas earlier this year. Armed with an Android LCD screen with Evernote capability, this is definitely one of the more feature-rich appliances you’ll find in 2013. You’ll find most of the other features you’d expect on a high-end french door refrigerator to go along with the flashy LCD screen. Dual evaporators, dual compressors, LED lighting, temperature and humidity controlled drawers, as well as tempered glass shelves that slide out and guard against spills.

Perhaps even more interesting than the LCD is the 4 door design that allows for a seperate 6.5 cubic foot compartment which can be set to a custom temperature. This means it can be used for fresh or frozen food, whichever you need more room for. That is a great idea in  my estimation, and allows for a lot of flexibility for those who like to stock up the freezer once a month, and then end up with an empty freezer and lots of left-overs by the end of the month.

Not everything is known about this fridge yet though. Energy efficiency hasn’t been made public yet, and dimensions are still somewhat of a guessing game. There is a T9000 model which has been available in Korea for almost a year now, but whether the one for US markets will be significantly different or not hasn’t been made clear yet. It’s estimated MSRP is about $4000, which isn’t too outrageous when you put it up against other top-of-the-line models which can extend into 5 figure territory. By fitting just about every feature you can think of into the T9000, and doing it for a (relatively) low price, Samsung has assured this fridge a top 5 ranking. The price is just a bit too high to warrant moving it higher with all the remaining unknowns though.

One of the more interesting developments in refrigerator designs on the market today are how many retro styled refrigerators there are. You don’t often see them from major name brands, but there are countless less well-known names out there offering modern refrigerators with a vintage look. Elmira is one of these brands, and their model 1950 is one of my favorite refrigerators from a visual standpoint.

Retro refrigerators often still look a bit too modern in their styling, and instead rely on bright color schemes and lots of chrome to give a vintage feel to the appliance. The 1950 from Elmira Northstar actually looks straight out of 1950 though, and it’s a great look! The enamel finish is beautiful, and the sides get the same treatment as the front. Even in a muted color like white, the Elmira Northstar 1950 will be the centerpiece of any kitchen it graces.

The feature set on retro refrigerators is usually lacking a bit of course. You won’t find water or ice dispensers in the door naturally, as that would ruin the look. The 1950 is somewhat of an anomaly though in that it does have some very interesting features in the interior. The shelving, lighting, and drawers are high quality. There’s gallon door bins. You can opt for an ice-maker even. Energy efficiency isn’t anything special, at 448 kWh per year.

Prices are generally much higher with retro refrigerators, and the 1950 is no exception with a MSRP of $4195. But with such a beautiful vintage look, it can justify such a price-tag even though it’s not an especially large fridge at just 18.5 cubic feet of capacity.

Sub-Zero makes some great refrigerators, and the Pro 48 may be the best of the bunch. This is the go-to refrigerator for kitchen designers and anyone looking for a top-of-the-line built-in refrigerator. Available in stainless or custom panel finishes, and even with a freestanding option using their kit, this refrigerator can go with any style of decor.

The looks aren’t all there is to this fridge either. Sub-Zero’s engineering is unsurpassed. The materials used are top-flight. The capacity is very large for what amounts to a counter-depth refrigerator, as you’d expect from a 48″ wide fridge.

As with all Sub Zero refrigerators though, price is the sticking point. You get what you pay for, which in this case is one of the most expensive refrigerators you can buy. As much as the Sub Zero Pro 48 justifies that cost, it’s just a bit too high to allow it any further up my list of 2013’s best refrigerators. 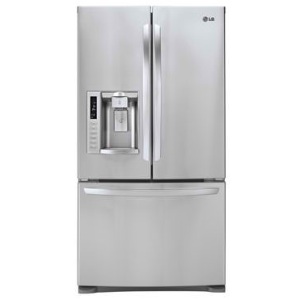 If I was in the market for a refrigerator, this is probably the one I’d buy. Yah, it isn’t the flashiest, it doesn’t do anything new, but it does a whole lot and without a premium pricetag. The MSRP is $2999, which makes it the lowest priced refrigerator on this list … and it’s street price is far less than that. LG doesn’t skimp on features with the LFX28991ST to hit that price-point though. You get premium LED lighting, dual compressors, a stainless finish, and just about everything else you’d expect to find on a high-end french door refrigerator.

That isn’t why I’d buy it though. Not only will you save money up-front when you buy it, but the LFX28991ST is actually the most energy efficient french door refrigerator on the market today. Even though top freezers tend to be more efficient than other configurations, the LG LFX28991ST beats every single one of them from a major brand. Only some specialty refrigerators from obscure brands can boast better energy efficiency, and none of them would actually look good in a kitchen.

However, since the LG in this case doesn’t do anything else particularly special I can’t bring myself to give it the top spot. The fact that the stainless finish is the only one available makes it a bit easier for me to drop it to #2 as well. If LG had given us more options in color, I might have had to reconsider. In any case, the LFX28991ST is the one to buy. On the other hand, the fridge to “ooh” and “ahh” at is …

With the GE CFE29TSDSS you no longer need to heat water in the microwave or on the stove for many applications. There are pre-set temperatures for common uses of hot water, such as making tea or soup. You can dial in whatever temperature you want in the allowed range by using the custom setting. Boiling water isn’t allowed though, for safety reasons. The other safety feature is the nob used to dispense hot water needs to be depressed and then turned.

The one complaint I have with this fridge is the price. The MSRP at $3000 is a bit high. Of course you can find it in stores for significantly less already, and so that’s not such a big deal. In every other way the GE CFE29TSDSS is a great refrigerator. The looks, the features, it’s all there. Add in the most useful new addition to refrigeration, and you have the best refrigerator for 2013 in this author’s opinion!